Praise Does Wonders For Our Sense Of Hearing

The great businessman, Arnold H. Glasow, was spot on with his quote about the effect praise has on a person. Receiving a compliment from a stylish friend about one’s new fall outfit can immediately elicit an ear-to-ear grin. When friends gush about your chipotle chili, it just feels good and does wonders for your mood. What if these smiles and good moods were commonplace in the office too, because you were regularly recognized for a job well done?

You might work harder, be more committed and loyal to the organization and want to stay there for the long haul. In a survey conducted by Globoforce’s WorkHuman Research Institute, receiving recognition at work makes people feel more appreciated (92 percent); prouder of their work (86 percent); more satisfied with their job (85 percent); happier at work (86 percent); more engaged (83 percent); and more committed to the company (81 percent). You may be asking, “What about money as a reward?”

Show Me the Money 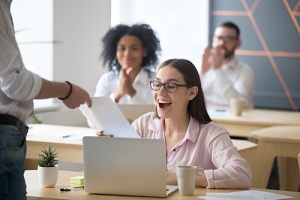 No doubt, money can be a great motivator, but a comprehensive employee recognition program utilizes monetary AND non-monetary awards. Among non-monetary rewards, recognition for a job well done ranks among those most desired and appreciated by employees. The reason is simple. The desire for recognition is a fundamental human need. Recognition demonstrates others appreciate and value your contribution which causes a rush of endorphins to the brain reaping all types of benefits.

Positive reinforcement in the form of recognition is a motivator to continue to produce and even improve one’s work. Employee recognition is one of the key drivers when motivating employees in the workplace, and 78 percent of employees would work harder if they were better recognized, according to Globoforce. A Harvard Business Review survey showed 82 percent of employed Americans don’t feel that their supervisors recognize them enough for their contributions. Further, the same survey revealed 40 percent of employed Americans say they’d put more energy into their work if they were recognized more often. Giving recognition may be the easiest and most inexpensive way to increase employee productivity.

And the Whitest Sneakers Award goes to . . . The Office’s Dundies episode (season 2) was hilarious. Receiving a meaningless award isn’t. Recognition must be meaningful to the recipient or it may have the opposite effect you are seeking. Being thoughtful about what employees actually appreciate is key to a successful employee recognition program. For example, if your team has put in long hours to successfully complete a project, consider giving them an extra day of leave to spend with their families in recognition for all their hard work. Perhaps a heartfelt, hand-written thank you note would do the trick.

Joy to the World

“There can be no joy in living without joy in work.” One doesn’t have to be a great philosopher to understand the words of Thomas Aquinas. According to Globoforce’s report, “ “Bringing More Humanity to Recognition, Performance, and Life at Work,” 93 percent of U.S. workers surveyed who have been recognized within the last six months say that the work they do at their organization has meaning and purpose. Only 72 percent of those workers who have never been recognized agree. Creating a culture where employees feel joyful can have a huge impact on morale, retention and productivity. Joyful employees are also more likely to “spread the love” to colleagues, strengthening teams and eventually whole divisions.

“People may take a job for more money, but they often leave it for more recognition.” Dr. Bob Nelson, best-selling author and motivational speaker, believes by recognizing employees, you retain them. Employees who lack recognition and feedback may wonder, “What’s the point?” Your competitor may be waiting to poach your valued employees and can do so by simply telling them they are valued and needed elsewhere.

Great Job, Now Get Back to Work 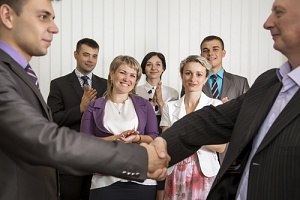 It is not enough to periodically praise an employee. Employee recognition should be ingrained in a company’s culture and regularly practiced. A 2018 Gallup analysis found that only one in three U.S. employees strongly agreed they had received recognition or praise for doing good work in the previous seven days. Gallup recommends a week shouldn’t go by without management giving recognition, at least in broad terms, to those deserving employees. Timely recognition reaps better and more benefits for both employees and the organization.

For some companies, simply encouraging managers to speak up more often about their teams’ accomplishments works wonders. For others, it would be more beneficial to establish a formal recognition program. Smart HR consultants will take the time to really get to know you and your company and make meaningful recommendations on how to establish an employee recognition program that works for your organization. If you are going to take this important step, do it right and call Smart HR today.